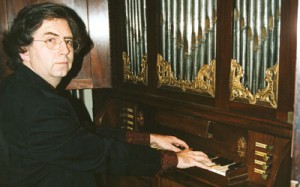 The Dutch musician and author/journalist Christo Lelie was born in 1956 in Dordrecht. He studied piano and organ at the Rotterdam Conservatory. He is working as a pianist at the Codarts Dance Academy Rotterdam since 1983 and as a church organist in Delft at the Vierhovenkerk and the “Vrijzinnig Hervormde Gemeente”.

He has given numerous concerts as an organist and as a pianist in the Netherlands, Germany and the Ukraine. In 1995 he was member of the jury of the International Piano Competition in Honor of Vladimir Horowitz. During this competition he gave a highly successful organ recital at the Kharkov Philharmonia. He was lecturing in The Netherlands, Belgium, Austria, Ukraine and Croatia.

Christo Lelie is one of the leading music journalists in The Netherlands, with a strong specialization on the (early) piano and the organ. He is music critic of the daily newspaper Trouw, and he has written articles for many professional music journals and cd-labels. He published numerous extensive articles and interviews in the Netherlands and abroad on Franz Liszt, classical and romantic composers, the history of the early piano, pianists, piano pedagogy, organs, music and the brain. Some of his articles have been translated into English, Slovenian and Russian. In 1995 he published a highly praised book “Van Piano tot Forte” on the history of the early piano in the Dutch language. He did a lot of work for radio and television as well, in the Netherlands and Belgium.

For many years he is involved with the European Piano Teachers Association (EPTA) as a member of the board. Since 1984 he is the editor-in-chief of the Piano Bulletin, a journal published every four months by EPTA Netherlands. He is also vice-president of the Dutch Liszt Society (Franz Liszt Kring) and editor of the Journal of the Franz Liszt Kring. He was jury member and press-jury member in many national and international piano competitions.